End of the Year Projects

As many of us know, the end of the school year is upon us. For my school district, we are done this week with Monday being the last day of having a full day of classes followed by three days of exams. It is a really bitter sweet time for me because unlike many of my counterparts in the program, I stayed in my student teaching placement rather than receiving an additional placement. Because of this, I had the privilege of being with some of my students for half of the school year. After these last couple months, I have grown to appreciate each student for their uniqueness and have continued to grow in my own ability learning what not to do along with what I should do.

With the end of the year came my decision to provide my students with a final project (they still take a final exam and typically my mentor teacher gives out a project, as well). Rather than sticking to a project that my mentor typically does, I decided to give a very open ended project to my students.

Below is the handout that I gave to my students but I'll give you the jist of it here. Basically, I told my kids to pick a topic that was covered in the recent semester. Their job was to find a way to present the material that they could also have fun with. I gave some ideas such as art (if you can't tell, I love this option), music videos, games, books, etc. I really emphasized though that it was their time to find a way to bring their talents and interests into the math classroom and have some fun beginning to review for their finals. Now of course, the open endedness of this project was a little difficult for students to grasp as many times, they are given a project where they must discuss this and this and this and blah blah blah. It was also rather difficult to grade because of how different most of them were based upon the broad grading criteria that I gave. A bulk of the points was for "content" where I looked at the depth, accuracy, whether it helped them review, as well as having all components of their project.

Each student gave me a proposal where they discussed what they wanted to accomplish and create in the project and I provided feedback based upon their proposal. Proposals that I didn't approve and had the students redo were basically "poster" ideas where they would write examples, definitions, and theorems. One critique that I did have for myself was the timing of when I gave the students the project guidelines. Next time, I would give the project guidelines out sooner so the proposals and acceptances could be received sooner that way students would have more time to work on their projects (the videos would benefit from this).

This project reaffirmed to me how wonderfully talented my students are and I am so incredibly proud of all of them. About half of the projects that I got back were games (be it gameboards or Smart board games) and the other half were a variety of creations ranging from art to movies to books. I've included a few pictures of some of the wonderful projects that I had the privilege of grading this past weekend. 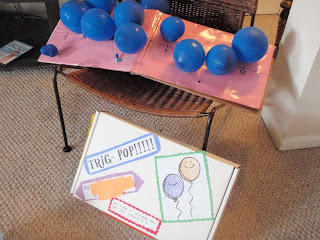 The game of Trig-Pop! This was a very unique game where the students placed balloons on various spots of the sine and cosine graphs. Players were to pop the balloons with darts giving them a number associated with a particular question. I had informed the group as well as all groups making games that they needed to have all parts of a game (aka instructions, a box, all necessary pieces) and this group did a great job of including extra balloons, darts, tape for the balloons, and instructions that were on paper such that it looked as if it were straight out of a real game box. Hasbro, look out! 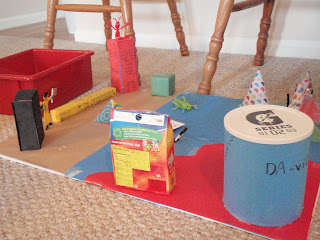 This group created a town using various 3-d objects. Their job was also to find the volume, surface areas, and lateral areas of these objects. One things that I would have suggested to a group doing a mock town would be to use an inspiration such as New York where the students can incorporate scales into their work. 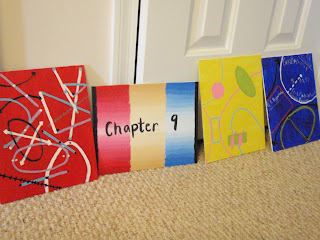 This one and the next one are two of the art projects that I received. This one is from my honors algebra 2 class where the students took the various conics that they studied and created paintings of the topics. On the back, they put examples and various equations used in the sections. My mentor teacher and I both wanted to keep this set..... we shall see who keeps them.... 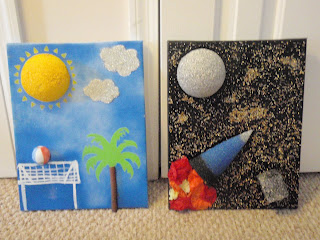 No matter what, I'm keeping these two paintings and I've already let the artists know. Two of my geometry students painted a night and day painting where they found surface area, volume, and lateral area of the various objects in their paintings. I can't wait to hang these up in my future classroom! 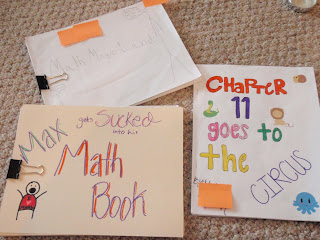 These were three of the books that I received. One of them (the harder to see one) was a graphic novel style story where the students used their classmates and isms from our class to frame how they retaught volume and surface area. The other book, the circus theme, featured several bits of info from the circle chapter in a circus style example book. Lastly, the Max book was a short story featuring several word problems throughout for the reader to solve. They were all very creative and fun to read! 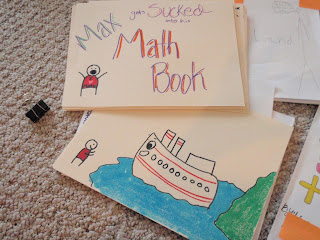 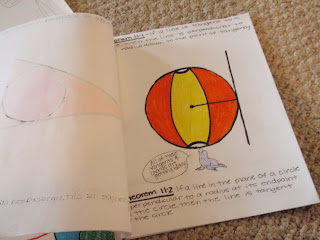 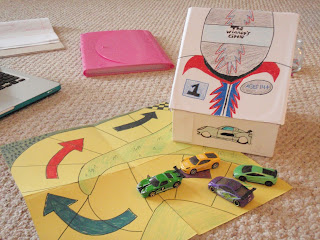 Of the board games that I received, several were very original ideas. In this one, the student created a race car theme, "The Winner's Circle," and had the whole box for the game with cars and instructions. It was very original and it was for this originality that I really appreciated it. 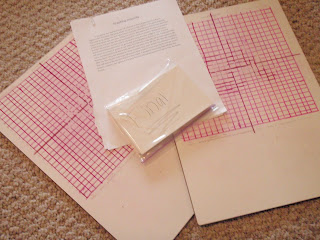 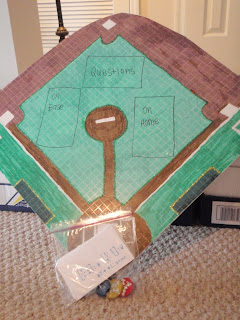 Another original board game that was themed around baseball and even had handmade baseball pieces to play with. 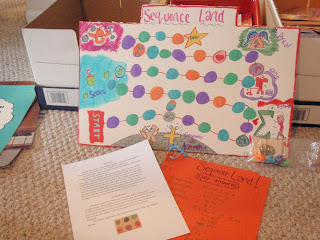 I received several games that had the theme of CandyLand but this one was by far the best. The student recreated the several characters of CandyLand to feature different math characters such as Mr. Pascal. It was adorable. Even their instructions were well done as the student took a picture of the different landing spaces to refer to when describing the game. 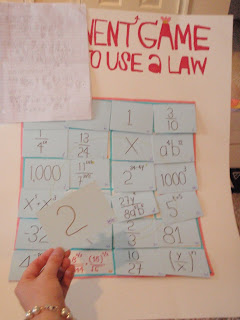 Another well done game, the student created a matching game where the students would slide the card into a created hole in the board based upon the space that it matched. You can't see it, but it actually makes a smiley face once completed. 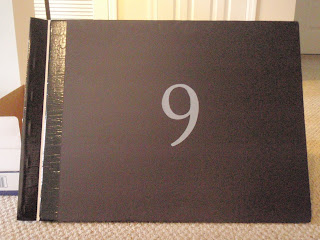 This book looks deceiving but it is filled with tons of wonderful math applications based upon the content in chapter 9 (Conics). The student researched the various areas of the world such as our eye sight and roller coasters that dealt with the conics that the students studied. The students were in awe with this project. 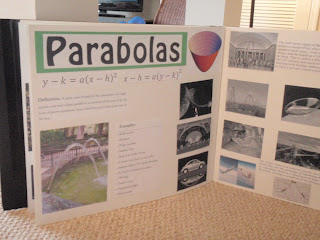 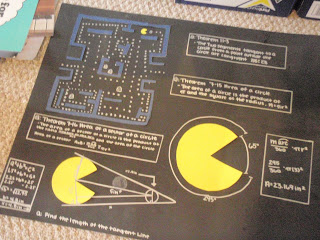 This PacMan themed project dealt with the circle unit done in the Geometry classes where the students found the measure of the arc and arc length for PacMan as well as did a tangent line problem using PacMan and the food he eats.

As I said earlier, I received many wonderful projects from my students further showing me how talented they all are. Some of the projects, however, I couldn't post on here. I had students playing music in the classroom on the violin after discussing the applications of sine and cosine with music. I had students create music videos for the unit circle, one of which will be uploaded to YouTube tomorrow that I will later post the link to!! I also had a ClayMation movie done by students, which if you don't know requires over 1000 pictures to be taken to piece together. I have another SlowMation video being shown to me on Monday due to other technologic difficulties. Two of my Geometry students did a live performance of their version of "Red Solo Cup" where they described how to find the volume of a cylinder and cube (ice). I had a Law and Order: SVU themed informational video as well as a survival in the wilderness video describing the Midpoint and Distance formulas. I also can't show the wonderful calculator programs that my students designed. One program helped students solve trigonometric identities/inverses, two topics that my kids didn't really care for.

After all of this, my mentor and I talked about what I would do differently and here was what I decided.... I would have a Midterm and a Final project so that they could review for both. As well, I would have 4 categories of Project: Games / Videos / Art / Books. I would pair these categories and one pair would be offered as a Midterm Project and the other pair as a Final Project. Of course, I could always create the rubrics for all of these options and have the kids receive the various rubrics so that they can continue to choose freely.... I'm very torn by this just because I so much value of the differentiated focus that the project offered.

So the next time you debate doing a project with your students, I challenge you to leave it open ended so that your students can showcase their ability because you really will see students actively engaged who typically wouldn't be as interested in math.
Final Project
Posted by Miss Rudolph at 7:28 PM

Email ThisBlogThis!Share to TwitterShare to FacebookShare to Pinterest
Labels: Projects

Miss Rudolph
Columbus, OH
I'm a third year high school math teacher attempting to navigate my way to being a successful. As many say, I belong in a kindergarten classroom... probably why I love all the elementary blogs I've found. However, I've noticed that the blogging world has failed me with secondary education blogs. So, I've taken it upon myself to develop a blog for those secondary education teachers who like to be as organized and creative as our elementary counterparts. 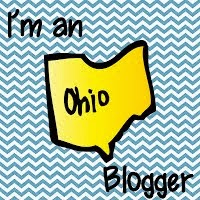 You know all those wonderful classroom decorations I got? Well you can too! All you need to do is log onto vistaprint.com and create, create, create! Warning, I would have pinterest handy so that you can have some inspiration! Enjoy saving and making your classroom beautiful at the same time!